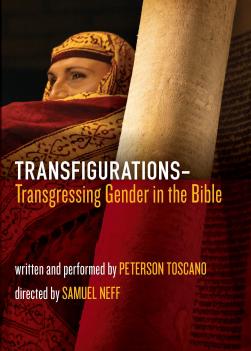 We are showing the 2017 film, Transfigurations—Transgressing Gender in the Bible – written and performed by Peterson Toscano; directed by Samuel Neff – as the November monthly meeting’s program.

Peterson Toscano has shaken up Bible academics and received high praise for his ground-breaking, genre-bending, gender blending Bible scholarship. By unearthing the stories of gender-variant people in the Hebrew and Christian scriptures, Toscano’s one-person play deepens well-known (and lesser-known) Bible stories and presents an array of Bible characters with an array of genders.

“Transfigurations accomplishes several fairly extraordinary things. It speaks into the fraught intersection of religion and LGBTQ issues, and, without pretending neutrality, welcomes audience members with widely divergent perspectives. It is accessible to people who have never cracked open a Bible, while offering meaningful insights to biblical scholars and other experts. It is intellectually rigorous but grounded in emotion, spirit, and body.”
~ Kody Gabriel Hersh, Friends Journal

“A brilliant theologian and playwright, the work of Peterson Toscano not only shifted my own connection to biblical texts, but helped me reimagine how working within communities of faith might be possible. A necessary artist to know for LGBTQ activists, environmentalists, faith leaders and humans everywhere.”
~ J Mase III, Black/trans/queer poet

“Toscano’s excellent theater chops morph characters and identities in that world-changing way only performance allows. His writing and philosophy educate and loosen the tightest knots of queer and religious entanglements. But it’s his heart, which his engaging presence radiates, that will pull you in, warm you up, and leave you pleading for an encore.”
~ Scott Turner Scofield, Transgender actor, artist, solo performer & diversity speaker.

“Peterson Toscano’s work combines astute readings of the Bible with great story-telling and comedy. He offers interpretations of the texts and insights that even experienced biblical scholars haven’t seen before. When portrayed by Toscano, Bible stories and characters come to life with wit, sympathy, and humor.”
~ Dale Martin, PhD Woolsey Professor of Religious Studies, Yale University. Author of Sex and the Single Savior

More about: Transfigurations, the movie.

Order the film from Barclay Press.

PFLAG Olympia’s Annual Candidates Forum
October 17th, 2 to 3:30 pm.  This year due to our circumstances we will be holding our forum virtually (zoom).  We will be recording the forum for our members to view. Please send us your questions you would like to ask. If you would like to volunteer to help facilitate the forum, please contact the chapter president.

Olympia Farmer’s Market Saturday October 30th 10 am to 3 pm. Join us for the Market Harvest celebration its always a fun day filled with activities including trick-or-treating with Market vendors for the kids’ and other activities. This year the Market will also have cooking  demonstrations and more! It’s a fun day and we always have some goodies to pass out to the kids. https://www.olympiafarmersmarket.com/post/save-the-date-for-our-market-harvest-celebration

Fall Birding Event at Nisqually Wildlife Refuge
Saturday, November 6th at 8:30 a.m. rain or shine.
We will have 3-4 guides from Audubon and likely 1 or 2 more from USFWS. Binoculars will be available. Due to COVID requirements, the refuge would like us to limit it to 30 people. We are asking for an RSVP by October 25th. Contact the chapter president to let us know you want to join us.